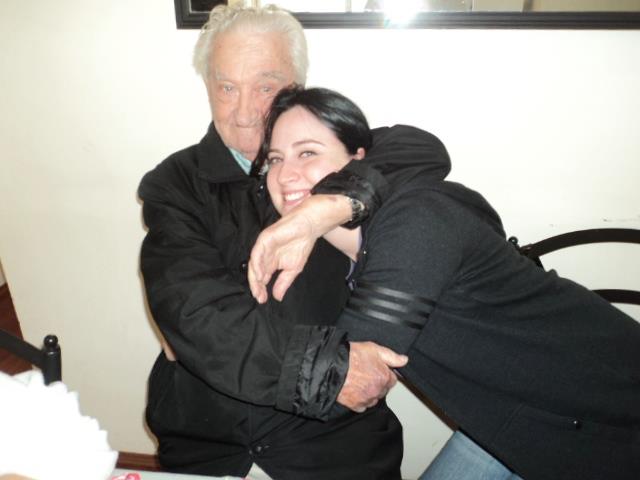 It had been a coulpe of weeks since I had asked him to teach me German. It was after he told me his mother, my great grandmother who came from Germany, used to speak that language with her kids, but had to stop during the war. At the time, it was a bit hard to be an immigrant in Brazil from the same country from that lunatic with the ugly mustache.

He also told me about the banana bread his mother used to bake and that he, as a child, had to take to the guys at the military quarter down the street.

Granpa liked to tell stories. Our classes were, actually, a little boring, because he would digress a lot between one verb and another and would take hours to finish a chapter from the book. He would tell me about the time when he went to college, when he met grandma, when he sang at the church coir, when he went to Brasília, our country’s capital, with other engineers (and his whole family) to build the city when it was nothing but mud.

When Alzheimer’s started showing it’s early signs, he would tell the same story many times. Sometimes, if you didn’t stop him, he would tell it over and over, in a loop. He would reach the end of the story and say “did I tell you about the time I had a VIP seat at my soccer team stadium?” right after having told he stopped going to matches when they got violent. And I would never stop him. “Really, grandpa??” and he would go back to the start again. He enjoyed it. He loved telling stories.

His condition got worse, and the stories stopped making sense. He would describe a scene, but there was no context anymore. After that, not even the descriptions were real – he became delusional.

This week, grandpa Lucas died. He was living at a nursing home for a few months and I visited him a couple of times. His disease was in its saddest stage, he had no perception of reality. He’d get agressive, call people names, wouldn’t recognize anyone anymore.

I rushed to my grandma’s house as soon as I heard the news. I sat on that dinner table, the same one I used to seat at after school, with a notebook and a pencil, right after having granny’s lunch, to learn our family’s forgotten language. I haven’t managed to learn more than ten words in German. But I understood that those stories that got in the way were in fact my most precious lessons. It’s not a coincidence I became a story teller myself.

Grandpa is gone. But, in some way, du bist hier, Großvater. In me, in my cousins, in grandma, in the house, in my mom and my uncles.

That story has sadly come to an end. And I have nothing else to say other than dankeschön, grandpa. <3