“Don’t expect from us the silence of the cowards”, “Temer, go home”. Photo: Nunah Alle to the independent news group Mídia Ninja.

I am a very fearful person. I’m afraid of robbery, rape, accidents, the flu. I go out to jog and my heart skips a beat every time a man gets too close. I always use a seat belt, even in the back seat. I get into relationships frightened of getting my heart broken.

But fear can also paralize us. Make us not leave the house, suffer from anxiety. Fear imprisons us and becomes itself the problem. It’s like when your legs go numb the minute you must run away.

I have been facing my fears. It’s been hard all the time, but I keep trying. It’s understandable: I’m afraid my fears will pose me a bigger risk.

These last days, for example, I went out on the streets to protest against the coup that happened here, Brazil. 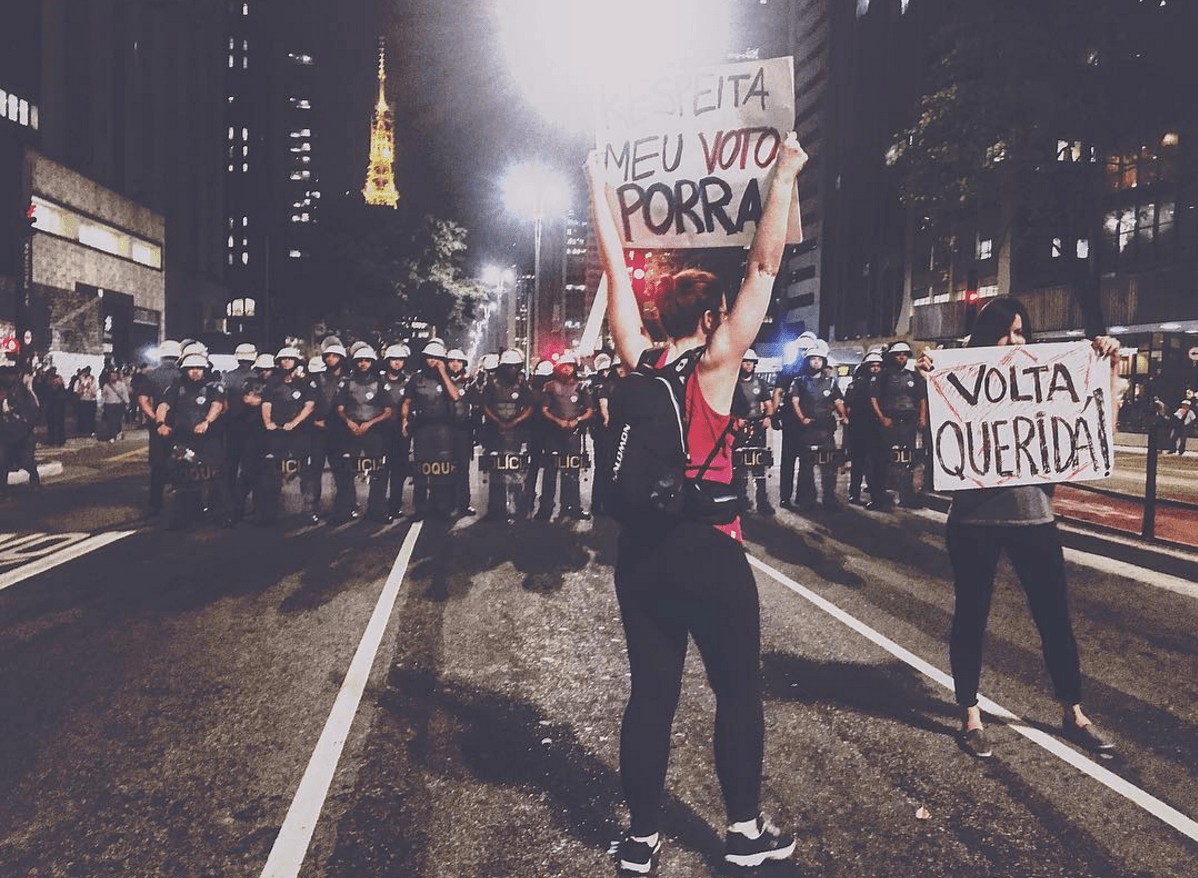 First, on Tuesday, a day after the rightful president, Ms. Dilma Roussef, was questioned for 14 hours defending herself from accusations of an administrative crime she hasn’t commited in a corrupt impeachment process.

I was scared as fuck. I live in Sao Paulo, one of the cities with the most violent police in Brazil. Governor Alckmin’s troops are known for being extremely violent even in manifestations where the protesters are teachers and underaged high school students. Not to mention the racist slaughter they promote on poor neighbourhoods on a daily basis.

It was a pacific protest, but that has never stopped the police’s violence. The only guarantee I could have that I wouldn’t be beaten up by them was to protest against Dilma (the police is so peaceful at right wing protests that they take selfies with protesters).

I went with a friend who’s experienced at manifestations and is the most fearless person I know. She encouraged me, took my hand, taught me to observe the police’s movements to be able to tell when shit would become serious and where to run to. That day, I left early. She’d ask me “do you wanna leave?” and I’d say “I just don’t want to be beaten”. What a thing to say… Nobody there wanted to be beaten. What everyone wanted was to be heard: No Coup in Brazil, Temer Go Home, Respect Our Fucking Vote.

I got home and read the news: there were rubber bullets, tear gas bombs and people getting beaten. I escaped.

Yesterday, the coup took place. I spent the afternoon watching it live, on TV: an innocent president being taken down by a bunch of corrupt politicians and the legally ineligible, illegitimate Michel “Fora” Temer took power.

I was as angry as scared. I knew the protest would be bigger, as people were so much more pissed of, and so would be the police response.

But the fear that won yesterday was that of not being a part of what I believe in my heart to be the only possible response to a coup d’état. I was afraid one day I would look back on my life and regret that, in that day, I’d stayed home.

Thousands of us started marching at Paulista, one of the most famous avenues in Sao Paulo, chanting “TEMER GO HOME”! It was beautiful… We crossed a building occupied by homeless families and their kids were waving at us happily as we chanted “occupy and resist!”. I cried.

It was a good thing I was there. It was good to shout at the top of my lungs that democracy matters, to actually do it instead of Facebook arguing with people more worried about the traffic than about the coup.

We were in the middle of Consolação street when shit got serious. At the parallel lane, a barricade was made. I saw police motorcycles rushing towards us and told my friend: “let’s get out of here”.

As we started to walk away, it happened: I suffered my first tear bomb attack.

I hadn’t even seen it, but my friend grabbed my hand and told me to run. POW!, the first one blew. Smoke everywhere, lots of running and yelling. I dropped my sign and ran as fast as I ever did. POW!, another blow as we ran into narrow streets, the group being dispersed. I was frightened to fracture my feet running like that, my legs were weakening, my heart racing, my breath at its limit, and my friend telling me “don’t stop. It’s worse if you stop”. I remembered all the photos and videos of protesters being brutally beaten up by the police and got terrified.

We ran and ran until we couldn’t run anymore and were on a calmer street with lots of people coming and going. She sprayed vinegar at my shirt to soothe the effects of the tear bomb. We washed our painted faces with vinegar too, I shove my red scarf at the bottom of my backpack. “Let’s hide inside one of these bars”, I suggested. She told me that those places close up all at once as soon as they feel it’s become dangerous and we were at the risk of being left alone in dark streets at night. That’s a scenario that scares the shit out of me in normal circumstances, but it was worsened by the perspective of angry policemen dying to beat me up for fun. And I’m a white, middle class woman, in the middle of the city center. Can you imagine what it’s like for a black woman in the suburban areas?

People started yelling “we will continue these way! Let’s all go to Roosevelt square” and all I could think was “no fucking way”.

My friend wanted to go on, I wanted to leave. We hugged, she followed the crowd and I got into a tax cab.

I started to feel safe again inside the car, the air conditioner on, windows closed. I smelled of vinegar, my sweat was getting cold, my heartbeat was going back to normal. At the street, brave people continued to protest. They yelled at the cars “we won’t rest! This is just the first day of the coup!”. At the back seat (seatbelt on, of course), I felt ashamed for leaving, but I know a desperate person won’t help in the middle of the fight.

More barricades at the streets, garbage bags on fire, protesters blocking the streets. Because in the face of a violent police, fuck protesting pacifically.

The driver had to be creative to escape the chaos. He was desperate to get away from it all. As I watched from my seat, I was hoping no one attacked the car, but I was also happy to see people wouldn’t watch democracy die without a fight.

I got home in one piece, but exhausted. Read the news on Whatsapp. My friend suffered more attacks and managed to get home safe. My sister in law, who was there two, reported to have suffered with the bombs too. She too was well. Not all of us were that lucky, though. A student got blinded but the police yesterday.

Another friend, who lives close to the protest area, told me policemen where throwing tear bombs from helicopters! She comforted me saying that it was good I was there, that we the people need to go to the streets, but that when the police starts to attack, the safest thing to do is run. Only some brave/crazy ones resist.

Well, I’ll keep fighting. Tackling my fear as best as I can, even if some can do it better, I will resist. Cowardice is not fearing, but remaining silent in the face of injustice.

The fear of losing democracy won.