There’s a social media movement called I’m a Victorius Woman (#SouMulherVitoriosa, in Portuguese) that urges women that are mothers, spouses and house wifes to post pictures of them “to show the world that a happy woman is one who has a family and takes care of her home“.

I like any pride campaign that encourages women to feel proud of their choices. But it is awful to see that, in order to make house wifes, mothers and married women to feel produ, this campaing tries to demoralize women that live different realities.

That’s not my impression, those are the words of Ana Paula Valadão, gospel singer, quoting the pastor who initiated the campaign: (see original here):

“Pastora Elizete is launching a social media campaign to show the world that a happy woman is one who has a family and takes care of her home. Victorious Women have to post on their Facebook, Instagram and Twitter pages a picture of them with their family (children and husband), or a photo wearing an apron, or doing the dishes, or carrying their baby, any image that indicates that you take care of your home and a subtitle that says “My family is my priority! #HappyToBeWomanSpouseMotherHousewife #ImAVictoriusWoman”.

The movement excludes from the notion of “victorious women” those who are not mothers, the ones that are married to other women, those who are not married (whether they’re single, widowed, divorced or living in a different family arrangement), women whose priority are their careers or that are not the only person responsible for the home chores. I’m specially bothers by the notion that a family is only one that’s composed of a wife, a husband and children. How about families without kids? And those with only one parent? Or the ones composed by grandparents and grandchildren? How about families with two dads or two moms? How about women that live alone?

Each woman is free to be whatever she wants and that includes being a spouse, a mother and a housewife, as I wrote in the article What’s wrong with praising Mrs. Temer as a “beautiful, maiden like housewife?”), spouses, mothers and housewives are very victorious, indeed. The problem is to think that they’re the only victorious one and try to force that pattern on all of us just because we are women.

So I suggest we make a little change in this campaign. I invite you all to engage and participate by using the hashtag #SouMulherVitorisa to post pictures of you with your family (whatever it looks like), or doing the dishes, cooking, carrying a baby, but also at work, having drinks with your friends, at trips, receiving awards etc.). Tell what your priorities are. I can be “my family”, but it can also be all sorts of things, like “my carreer”, “traveling around the world” or “loving without prejudice” and so on). 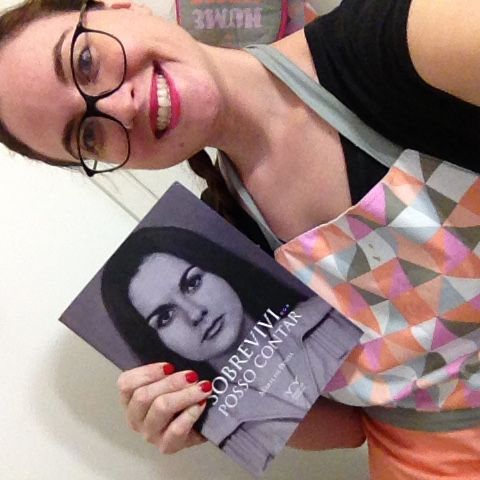 Here’s me, with my cake apron and the biography of Maria da Penha, women’s rights activists whose life inspired the homonymous anti-domestic violence law in Brazil. She represents my feminism and I’m very proud of that. I do not have a husband nor kids. My family are my boyfriend, my parents, my siblings and my nieces. I’m a great cooker and terrible at house chores. I’m also a very competent blogger, ad professional and published writer. #ImAVictoriusWoman because one day I found out that my value has nothing to do with my cooking or housekeeping skills, nor with my carreer and even less with my relationship status. I am free and that is my victory. Women’s freedom is my priority!