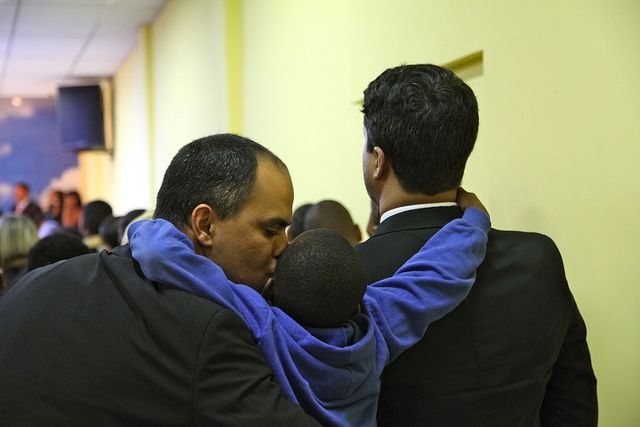 Here I was, preparing a post to tell how can defend homosexuality inside the church, being I a Christian woman (converted, practicing, God fearing, raised in a Baptist church and well educated in Bible kind of Christian), when I read the news that the first gay friendly church in São Paulo was launched in São Paulo with a full house service (it’s called Igreja Cristã Contemporânea or Contemporary Christian Church). My friends expressed their shock and sadness about it on social medias. So I’ll take this opportunity to ask you, my dear Christian reader, to reconsider your ideas. There’s something called “inclusive theology”, a study line that, among other things, claims that the Bible does not condemn homosexuality and that the verses that do were, in fact, mistranslated from the sacred original words (lots of information, studies, testimonies at the Gay Christian Network, a group of serious Christians dedicated to discuss this subject in depth). Before calling it “heresy” or say it’s a devil’s thing and start throwing stones, I beg you to listen to what they have to say… We have to admit that, at times along History, the church, the body of Christ, has been terribly wrong and has caused immense suffering to many people by supporting racism, social segregation between rich and poor, oppressing governments and even nazism and the Holocaust (not to mention the holy wars from the beginning of Christianism, shameful massacres). And nowadays, inside our churches, homophobia has been leading to the  segregation and, sadly, even to the suicide of some of our brothers and sisters that find out they’re gay. Not homosexuality: homophobia. And that could be your fault. Have you ever considered it? Have you seriously considered the possibility that you’re sinning in the eyes of our beloved Lord? It was thanks to people who felt segregated and dare to challenge the church of their times, such as Martin Luther and Martin Luther King, that the church put a stop to specific bigotries (considered absurd nowadays) and evolved to a more love driven church. That’s also the meaning of that verse that says “Do not conform to the pattern of this world, but be transformed by the renewing of your mind” (Romans 12:2) (that verse is oftenly used to react to “modernities”, but so rarely used to look inside our church).

So here’s the exercise I propose you: pray to our dear Lord asking for wisdom and discernment, open your heart and your ears and listen to what our gay Christian brothers and sister have to say. Without pre-judging them. Without calling them “sinners” or “fags”. Without presuming they’re perverts, pedophiles, promiscuous. Without feeling sorry or despise disguised as “compassion”. With nothing by Christ’s love in your heart (after all, that’s the second greatest commandment, to love one another).

The Bible says that the foolishness of God is wiser than human wisdom (1 Corinthians 1:25). What if the “fools” of our days are these people that claim that love between two people that have the same body shape (which is the great difference between hetero and homo love, in the end) is not a sin and can be as pure and as holy as the love that you feel for your wife or husband? That God created them, loves them and accepts them just the way they are, without asking them to change? That God is pleased when they get married and start a family? That we should welcome them in our churches, treating them as equals, and not as a disease that should be eliminated?